With this website, we would like to offer you information and tips for using the public transport in Barcelona. The city is too beautiful to waste your time and money by struggling with fare systems, queues at ticket vending machines and language barriers.

Of course, you can also find here network maps, current ticket prices (2023) and much more.

Local transport in Barcelona – useful for visitors and tourists?

The city has a well-developed urban transport system. For tourists and visitors of the city, the public transport system is the 1st choice, for travelling around in the city.
Parking facilities in the city centre are expensive, and traffic jam is part of daily life.

The entire fare system of the Barcelona public transport is city-wide organized by the “Autoritat del Transport Metropolità”.

Whether single ticket, 10 journey ticket (T-10) or travel card “Hola BCN”, here you will find information and current prices. So you can find easily the right ticket for your stay in Barcelona.

Knowing in advance, which ticket fits best to your needs, saves a lot of holiday time and money.

Choosing the right ticket before your trip will save you time and money in Barcelona.

Our tip in brief:
– if you don’t like to read details about the fare systems and the Barcelona public transport network – 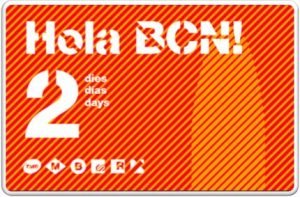 For most visitors of the city the “Hola BCN” day ticket is the best choice.

With this card, you can use unlimited the metro, bus, tram and suburban trains (Rodalies, Zone 1) during the entire validity period (2, 3, 4 or 5 days).
The metro ride to and from the airport is also included. You don’t have to buy the “metro airport ticket” (10.30 euros – round trip).

The “Hola BCN!” card is, compared to other big European cities, very cheap. The actual price (2023) is, depending on the chosen validity period, between 7.60 and 8.10 euro per day.

Save time and stress, by buying the „Hola BCN“ travel card online before departure – without any extra charge –

Your benefits of online purchasing:

– You will not waste your holiday time in queues in front of the ticket vending machines.

– After a long flight, you don’t have to deal with fare systems and ticket vending machines. You have already the right ticket to take the metro from the airport to downtown Barcelona and back.

Here is a short overview of the Barcelona public transport system. Detailed information, plans and tips are available on an extra site

You can get around fast and independent of traffic jams by metro (subway). Currently, the metro transports half a billion passengers per year on 12 lines with almost 160 stops. The metro in Barcelona is operated by two different companies.

Take the metro from the airport to the city center

Since February 2016, Barcelona Airport has been connected to the Barcelona metro network. The metro offers a fast and cheap connection from the airport to Barcelona city center.

> More information: By metro from the airport to the city center: travel times, ticket prices, stops….

The metro allows you to travel quickly and independently of traffic jams. El Prat Airport has been connected to Barcelona’s metro network since 2016. (Image: © John Carter)

The city buses of TMB

The red and white buses are the backbone of Barcelona’s mass transit system. (Image: ©tigercub66) Since 2004 there has been a modern tram in Barcelona again. The remnants of the original tram, the “Tramvia Blau”, now run on a 1.3 km route with historic carriages. (Image: © Escursso)

The suburban trains or suburban trains of the company “Rodalies de Catalunya” and “FGC” serve the surrounding area or the wider surroundings of Barcelona.
They offer public transport connections to over 70 municipalities or cities in the metropolitan region.

The suburban trains “Rodalies” and the light rail “FGC” offer connections to the surrounding area of Barcelona. They serve destinations more than 50 km away from Barcelona. (Image: © Raymond Kiès)

Especially for the suburban trains “Rodalies” and “FGC”, the ticket price depends on how many zones you want to cross.

A ticket must always be purchased according to the number of zones the traveler passes through. A maximum of 6 zones must be paid for.

Most tourists stay in zone 1

> Download: Map with zones of local transport in Barcelona

How much does a local transport ticket cost in Barcelona 2023?

Interesting for visitors of the city is the day ticket “Hola BCN”. With the “Hola BCN” ticket you can use the metro (incl. airport transfer), the city buses, the streetcar (Tram), the suburban train (Rodalies, zone 1), the suburban trains (FGC, zone 1) and the funicular / funicular (Funicular de Montjuïc) unlimited over the validity period (2, 3, 4 or 5 days).

Barcelona has a dense and well-developed local transport system.
For tourists and visitors to the city, public transport is the number one means of transport. Parking in the city center is expensive and traffic jams are common.

More information about public transport in Barcelona and helpful tips can be found in our travel guide.

This website uses cookies to improve your experience while you navigate through the website. Out of these, the cookies that are categorized as necessary are stored on your browser as they are essential for the working of basic functionalities of the website. We also use third-party cookies that help us analyze and understand how you use this website. These cookies will be stored in your browser only with your consent. You also have the option to opt-out of these cookies. But opting out of some of these cookies may affect your browsing experience.
Necessary Always Enabled
Necessary cookies are absolutely essential for the website to function properly. This category only includes cookies that ensures basic functionalities and security features of the website. These cookies do not store any personal information.
Non-necessary
Any cookies that may not be particularly necessary for the website to function and is used specifically to collect user personal data via analytics, ads, other embedded contents are termed as non-necessary cookies. It is mandatory to procure user consent prior to running these cookies on your website.
SAVE & ACCEPT