Aerobús – Shuttle bus from the airport to the city centre

Aerobús offers a direct bus connection (without changing) from ElPrat airport to Barcelona city centre (Plaça Catalunya). The modern buses are equipped with free Wi-Fi and a ramp for wheelchair users.

Here you will find important tips, current prices and information on airport transfer alternatives – such as the metro line airport ↔ city centre.

The Aerobús offers a fast and direct connection to the city centre. With the opening of the metro line to the airport, there is also an alternative to this shuttle bus. (Picture: travelguide.barcelona)

Apart from the stops at the airport (Terminal 1 or Terminal 2), there are only two stops en route.

Tips and advice for Aerobús passengers:

When returning to the airport, there are two lines. Line A1 goes to Terminal 1, A2 to Terminal 2. (Image: travelguide.barcelona)

Aerobús: Can I take large luggage, bicycles, prams on board?

All items that were transported on the plane can also be taken on Aerobús. There is a reserved area inside the buses for wheelchairs, prams, bicycles…

How much does a ticket for Aerobús Barcelona cost?

Children under 4 years of age travel free of charge. From the age of 4, they pay the full price. Unfortunately, this is also the norm for the rest of Barcelona’s local transport.

Tip: You can buy tickets on this website before your trip. This saves time and stress at the airport. After your flight, all you have to do is get on the bus and go.

The journey takes about 35 minutes. As buses depend on the traffic situation or traffic jams, it can also take longer. We therefore recommend that you plan a time buffer for the return journey.

How often do the shuttle buses run?

The buses run every 5-10 minutes, depending on the terminal and time of day. At the airport, the service starts at 5:35 am and ends at 1:00 am. There is no difference between weekdays, weekends and public holidays.

Where is the Aerobús stop at Terminal 1?

The bus stops are directly in front of the terminal building. They are very well signposted and easy to find. (Picture: travelguide.barcelona)

Here you can see where the Aerobús stops are located. A map with zoom function, which also shows the stops in the city centre, can be found below.

Where is the Aerobús stop at Terminal 2? 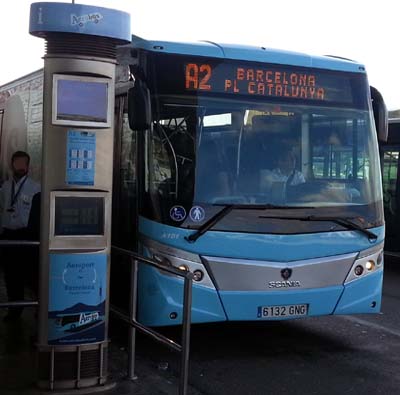 Terminal 2 has two stops for the Aerobús towards the city centre. Therefore, the walking distances to the stop are short.

Both stops are located directly in front of the terminal building and are easy to find.

This map shows the two Aerobús stops. A map with zoom function, which also shows the stops in the city centre, can be found below.

You can buy tickets for the Aerobús before your trip via this website without extra charge. This saves time and stress at the airport. After your flight, all you have to do is get on the bus and go.

Where are the Aerobús stops in the city centre of Barcelona?

The two most important stops are at the central squares “Plaça Catalunya” and “Plaça Espanya”. There are also connections to the Barcelona Metro at both stops. 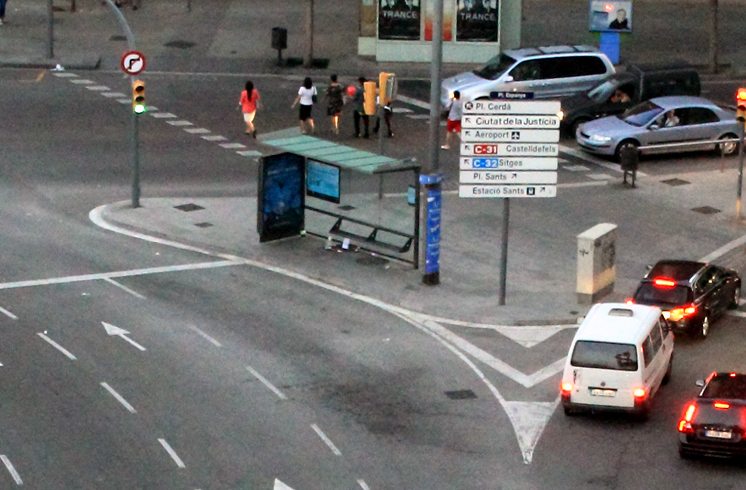 There is a stop for both lines at “Plaça Espanya” (Image M.Peinado, CC 2.0 licence)

At this central square, which is a huge roundabout, there is a stop for the Aerobús. Make sure you take the right bus (Departure Terminal 1 or Terminal 2, see below).

The Aerobús stop “Plaça Espanya” is located directly at the roundabout (base map: openstreetmap.org, ODbl 1.0 licence)

Due to its central location, the stop at “Plaça Espanya” is very popular. Environmentalists know this, too, and have put up a poster to speak out against the further expansion of the airport. (Image: By 2020 We Rise Up alternative advertisements, CC 2.0 license)

The stops at Plaça Catalunya are located directly in front of the large department stores “El Corte Inglés”. They are easy to find.

Attention: There is one stop for each of the two Aerobús lines. When returning to the airport, make sure you take the right bus. Line “A1” only goes to Terminal 1, line “A2” only to Terminal 2. The buses are clearly marked. 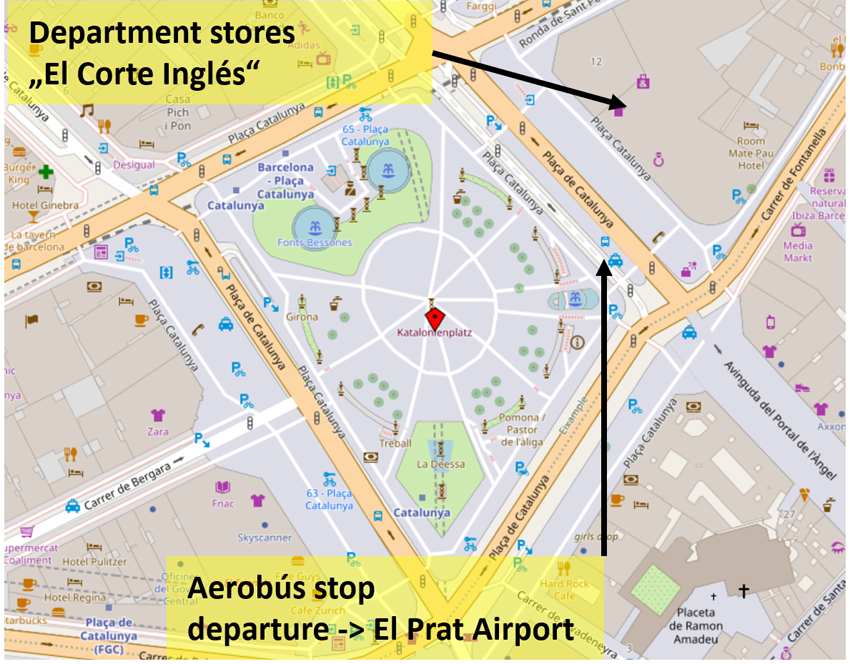 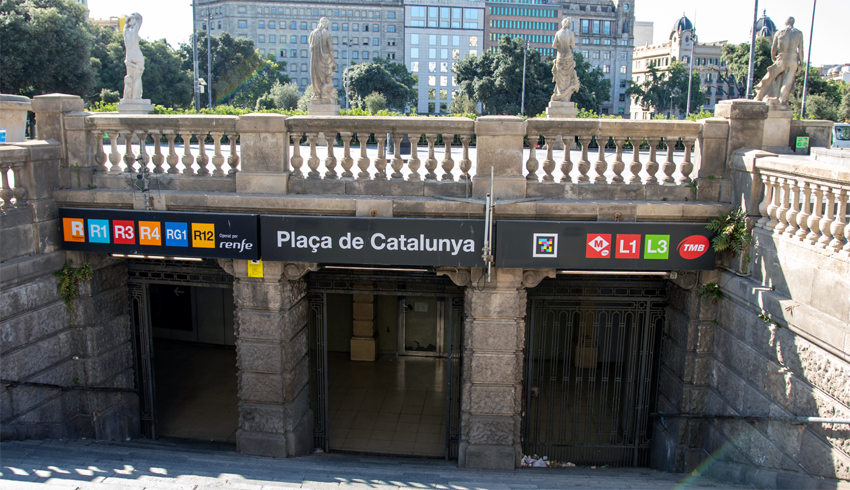 At Plaça Catalunya you have direct access to the Barcelona Metro (Image: travelguide.barcelona)

Attention: Take the right bus for the return journey

There is a separate Aerobús line for each of the two airport terminals. When returning, you need to make sure you take the right bus. The buses are clearly marked with your destination (either Terminal 1 or Terminal 2).

Metro or Aerobús: Which is the better choice for airport transfers?

The most popular alternative to the Aerobus is the metro. El Prat Airport has had its own metro connection since 2016. That’s why you won’t find anything about it in older travel guides / websites.

The metro – a popular alternative to the Aerobús (Image: airport.barcelona)

→ Here you will find everything you need to know about taking the metro from the airport to the city centre, including our tips for buying tickets – updated 2022

This website uses cookies to improve your experience while you navigate through the website. Out of these, the cookies that are categorized as necessary are stored on your browser as they are essential for the working of basic functionalities of the website. We also use third-party cookies that help us analyze and understand how you use this website. These cookies will be stored in your browser only with your consent. You also have the option to opt-out of these cookies. But opting out of some of these cookies may affect your browsing experience.
Necessary Always Enabled
Necessary cookies are absolutely essential for the website to function properly. This category only includes cookies that ensures basic functionalities and security features of the website. These cookies do not store any personal information.
Non-necessary
Any cookies that may not be particularly necessary for the website to function and is used specifically to collect user personal data via analytics, ads, other embedded contents are termed as non-necessary cookies. It is mandatory to procure user consent prior to running these cookies on your website.
SAVE & ACCEPT